I woke up early on the Amtrak. 5am. I turned to my left and Rose awoke around the same time as me. She is from West Hartford, and was on her way to Tampa to be with family. Her brother and law recently passed. Soon Marie and her husband across the aisle awoke. They were returning to Florida from New Hampshire. Marie’s mother in law recently passed.

Soon everyone in the cart begin to  stir. Whispers turned into quiet conversations. I rolled up my sleeping bag and put it back into my bag. I made sure I was hydrated, awaiting Jacksonville.

Rose and I conversed as we moseyed behind freight trains crossing the Florida-Georgia border. We watched the sun rise. Two hours behind schedule, we arrived in Jacksonville. Rose and Marie, both headed to Tampa, wished me farewell.

I stepped off the train and smiled. Palm trees, Spanish moss, and a kiss from the sun. I filled up my water bottle, and after touching base with friends and family, headed for Jacksonville.

A man offered me a taxi ride a number of times. It is in hindsight that I was able to understand what he was saying. Taxi drivers… The pavement in the driveway was smooth. I removed my sandals and headed east.

The Amtrak station is located 5.4 miles from downtown Jacksonville. A quick look at my gps, and I memorized the simple route. I was incredibly happy to be south. It felt good. I walked with my hiking backpack snug around my body, with a water bottle snuck in between.

Cars zipped by. I was walking on the shoulder to the right of the bike lane. I was captivated by the wild vegetation along the road. And the birds! I crossed over a bridge, or what runners call, a hill. I felt strong in my mind and spirit. Eastward.

I found sidewalk. I walked through Edward Rogers college and people watched as I trekked along. Lots of funny people, I pondered. I stopped at a Post office just west of downtown. I bought a postcard for 35 cents and sent it off. I checked my messages and snapped a shot of Jacksonville with my camera.

I entered downtown and strolled to the courthouse and hung out on the lawn. I marveled at the architecture of the city buildings. I returned a phone call from a friend and looked for a farmers market online. I found one!

Well, I thought I did. It wasn’t really a farmers market as listed. It was a fruit stand, more of a smoothie stand, located at Jacksonville Landing. I bought a grapefruit for 99 cents and headed back outside. The owner of the stand was headed inside as I was headed out. She did not like the idea of me peeling a grapefruit. “They will peel it for you inside, and turn it into juice! You don’t have to peel it!” She yelled at me. It was funny, I smiled.

I told her I was looking for a big bag of Florida oranges. I noticed she sold fruit but not in bulk. She offered me a smoothie. It sounded delicious but was a bit pricy. I could get a lot more fruit per dollar at a market. She haggled with me! It was funny. So for $5 dollars she filled up an entire plastic bag of fruit for me. Grapefruit, oranges, clementines, pears, and apples. She told me I needed nourishment. I was so happy I gave her a hug.

I ate my meal and heading over the water to the east side of Jacksonville. The weight of my backpack was starting to fatigue my legs. I walked passed bars and shops as people ate lunch. I stopped many times to stretch. Stretching makes such a difference.

I hopped on 90 east. I took a wrong turn that cost me an additional mile or so of walking. I met Anthony standing by an off ramp for the interstate. He had a sign, “anything helps, God Bless.” I asked him if he wanted some fruit. He asked what kind. I gave him the options but he quickly lost interest. I told him I liked his sign. We had a quick conversation. He is from Kentucky.

I kept trekking along the 90, gradually becoming more fatigued. I was properly hydrated, and had plenty of calories in me. The weight of my pack, my fruit bag, and water, all weighed heavy on my now sandaled-feet. I did a few body weight squats. I need to strengthen my legs. Work in progress.

On the other side of the 90 I saw the Assumption of the Blessed Virgin Mary parish. The grounds were very beautiful. After a quarter mile or so I doubled back to check it out.

I was hoping to catch an afternoon Mass. I missed it by an hour. Upon looking up their website, I learned the Assumption is a 24-hour adoration chapel. I knocked on the office door and was shown the way to the chapel. I spent some time in prayer with God, entrusting this journey to His mercy.

I left the chapel seeking a bathroom. I knocked on the door to the offices and no one answered. I turned around to leave. Just then a man poked his head out with a smile. Deacon Dale!

He introduced himself as did I. He instructed me to the rest room and asked me to swing by his office before leaving. I did so. We discussed my day. He was so helpful, and offered me lunch and some fruit. I filled up my water bottle and grabbed two bananas, thanking him for the food and drink. He asked if I would like a blessing and we prayed. Thanks be to God!

Just what I needed. I felt a renewed vigor. I crossed the street on 90 east and saw a man sitting on the side of the road reading a book. I asked him if he wanted some fruit. He was interested! He took two oranges and a tangerine. It felt good!

I continued down the 90 east. Up ahead I saw a thrift store: Saint Vincent de Paul. I decided to go in. Maybe they will even have a jogging stroller, I thought. It was a long shot. I walked in and towards the back of the store. Two women were pricing items. I told them it might seem strange, but I was wondering if they had any baby carriages for sale. Before I could even finish my sentence I saw three of them. “Wow,” I said aloud, “you do.” I think my jaw actually dropped. The kind woman told me that she had not priced them yet. The first one is one dollar, and the other two are six dollars, she said. Upon examining the strollers, the first two would not do, their wheels were cheap, small, and made of plastic. The third one had bicycle-like wheels! They were flat, but it was worth the small investment to purchase it and try to inflate the wheels at a gas station. The woman who priced the item asked if it was for a baby. I laughed and told them what I was doing. They seemed very interested.

I headed to the gas station in the same lot to pump up the tires for 50 cents. They inflated and were strong. I was so happy! Thus carriage was just what I needed: thick rubber tires, a bottom of basket storage area, and smooth under the wait of my pack. Perfect! I headed into Family Dollar and bought some bananas, oranges, spinach, and carrots. I took my pack off and placed it in the carriage. Groceries went in the BOB. I stood back and looked at what was given to me. It felt good.

I headed back to St. Vincent de Paul. I needed a fanny pack. Haha! Something to store my quick-need items to be accessible. Lillian and Arnetta chatted with me as I hunted through purses. They seemed very interested in what I was doing. Sifting through a large dump bin, I found a neon purple fanny pack. It was the only one! Well, in hindsight it is actually a miniature lunch box, but it functions just the same. It only cost 65 cents. Fumbling with coins and not wanting to break a bill, Arnetta insisted to use the donation jar for my purchase. I tossed my change in the jar in return. She also gave me a water!

I left St. Vincent de Paul feeling thankful. I was so excited to be pushing weight rather than carrying it. The cart cut through pavement like a speed boat on water. A woman pushing her child in a stroller looked at me, I laughed aloud.

The first day I covered 12 miles. The sun was coming down. I went to walmart and bought some items I decided I would need: mosquito net, fix-a-flat, a small strainer for vegetables, and another gallon of water. I ate a salad for dinner and watched the sunset. I approached an empty lot 50 yards from the road and within close proximity to a gas station. Behind a mound of dirt I laid my tarp on the ground and crawled into my sleeping bag. 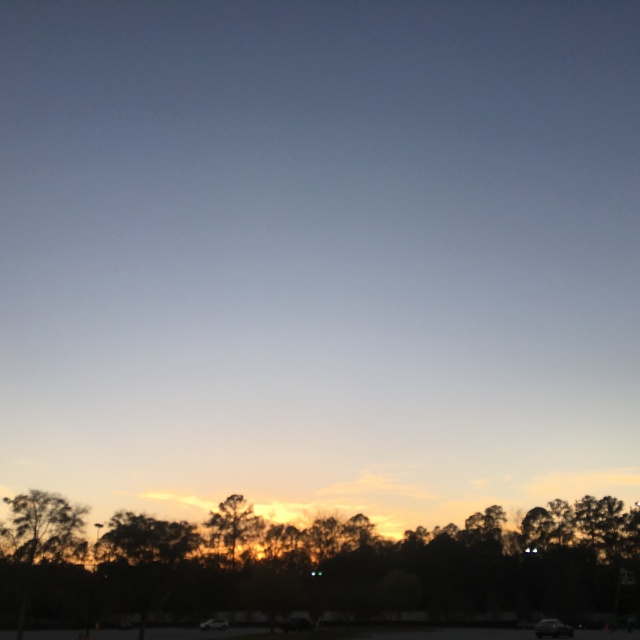