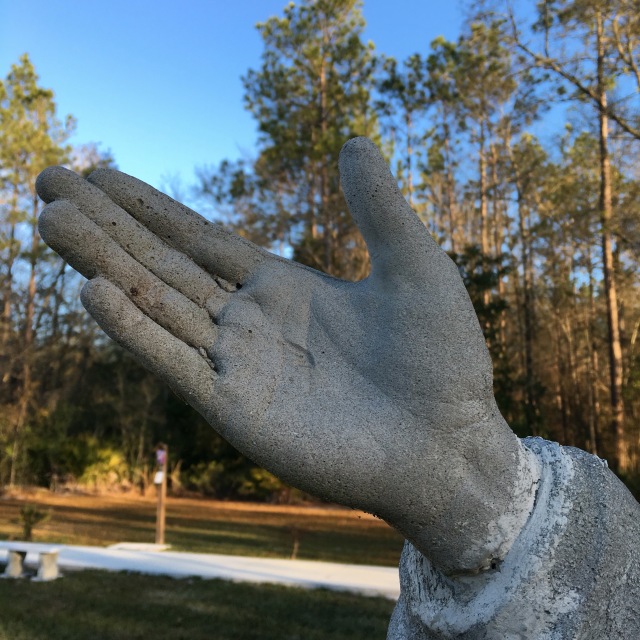 The people of Macclenny have been very good to me. When I arrived late Friday evening I was warmly welcomed.

Father Slawomir allowed me to camp in a very safe spot behind the church. He was very interested in the pilgrimage. He is a young polish priest, ordained 8 years ago in Detroit. He works a lot with criminals on death row. A very interesting man. We talked and chatted over a dinner of boiled shrimp, cole slaw, baked beans, and hush puppies. It was really good! He also gave me a blessing and a bag of rosary beads to hand out to people.
Glenn gave me a flashlight, a knife, and some money. I met Deacon Ken. Chuck led me to the food pantry to stock up on anything I needed and gave me some money. Pete saw me on 90 earlier that day, he gave me money and was very encouraging. So much money from everyone, it feels really strange accepting it all.
On Saturday after the vigil Mass Father Slawomir asked me to say a few words about the pilgrimage. The parishioners were very interested and receptive. I answered a few questions at the doors after Mass. A lot of people donated to the run. A man and woman even drove me to a motel room and put me up for the night. It was so overwhelming!

None of this is anything like what I expected. I figured I’d be sleeping in the woods or behind dumpsters for the next 6 months or so. Haha, probably will be!

The people of Macclenny Florida and of St. Mary’s parish have been so merciful. I had a restful weekend and had to hold myself back on running. Next destination: Lake City, Florida, 30 miles west of Macclenny.