I awoke early and got ready for the day. I showered and changed into clean clothes. I packed the buggy and checked out. I hit the sidewalk. 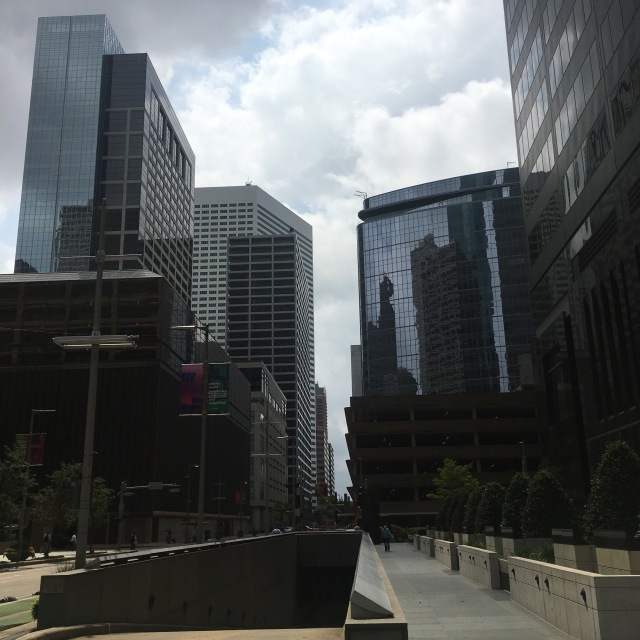 I explored Houston for a while meandering around downtown.

Just before high noon, I made my way to the Co Cathedral of the Sacred Heart. I attended Mass. 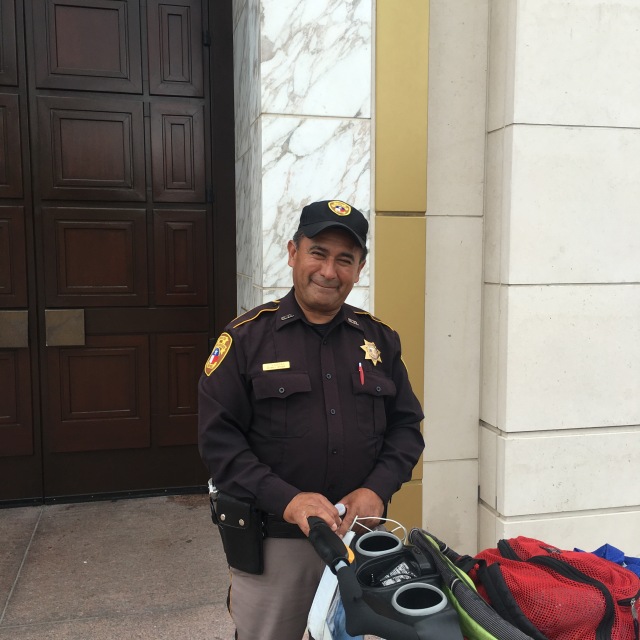 After Mass I met Jose! Almost all of our conversation was in Spanish and we talked for a long while. It was fun practicing! Jose works security at the co cathedral. He is originally from Venezuela. He told me to be safe and to take care.

I made my way through town. I found a Buffalo Wild Wings on a map and decided to have lunch. I met Staples! He walked right into the restaurant, directly up to me, and told me he was hungry. We sat down for a meal! We ate like kings: buffalo wings, Dr. Pepper, fries, buffalo chicken wraps, and more hot wings!
Staples is originally from Dallas. He has been homeless in Houston for a while. We talked about his struggles. We were both thankful to be sharing a meal. It was a pretty moving experience. Staples had a job interview the next day. He told me he now knew everything would be ok. I hope he gets the job! I sent him off with some food to go, some money, and a few other things. We parted ways.

Storms were setting upon the greater Houston area. Cindy called to make sure I had somewhere safe to stay. After studying the radar, it looked like it wouldn’t hit the downtown area for a few more hours. I decided to get a few miles in. 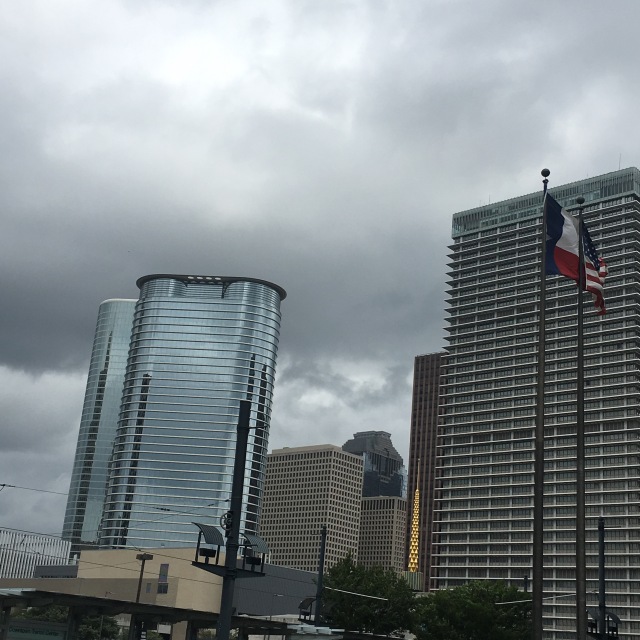 It rained, but it wasn’t a downpour, and it was refreshing. Around 3p.m. I made my way south west.

From left to right: Cosby, Roy, and Krystal

I met some friends outside Sears: Roy, Krystal, Cosby, and Cornelius, and many others! They were homeless and were sitting on the sidewalk under the awning to keep dry. I offered them what I had from the buggy and they took me up on the offer! You name it, they needed it; clean shirts, back packs, a sleeping bag, a tarp, a mosquito net, apples, bananas, bread, peanut butter, water, new socks, new underwear, toothpaste, deodorant, … all kinds of things. I gave what I had, and they all were very thankful. Most of them were camera shy but I took a few pictures. 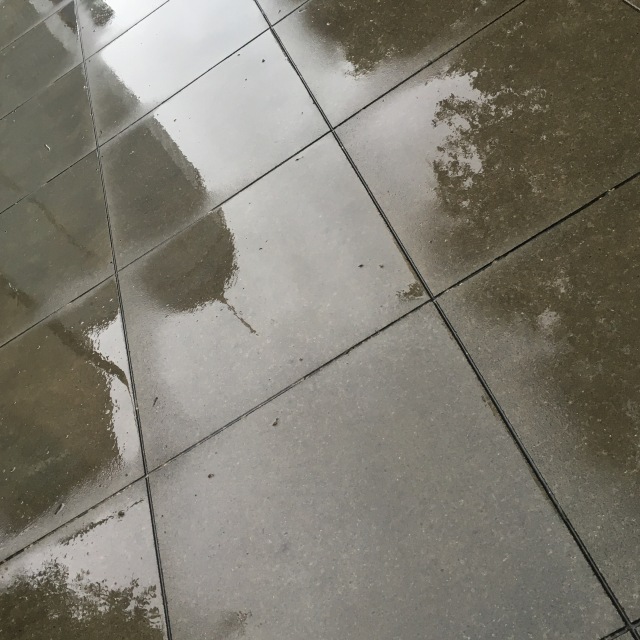 With a light buggy, I hit the sidewalk. Amazingly, I gave them everything they asked for and still had everything I needed: my fanny pack with my phone and wallet, a kit to change flats, my hammock, and the solar charger Rachel and Brandon had given me. I used a trash bag for a makeshift poncho and belt. I also covered the buggy in a trash bag to keep the hammock dry.

In the hospital district, I met Dana. She asked me for any coins I had. I offered her the only coins I had, two pennies in the cupholder. She told me it was OK. I asked if she had a safe place to stay tonight. Storms were setting in. She told me she did. We parted ways. 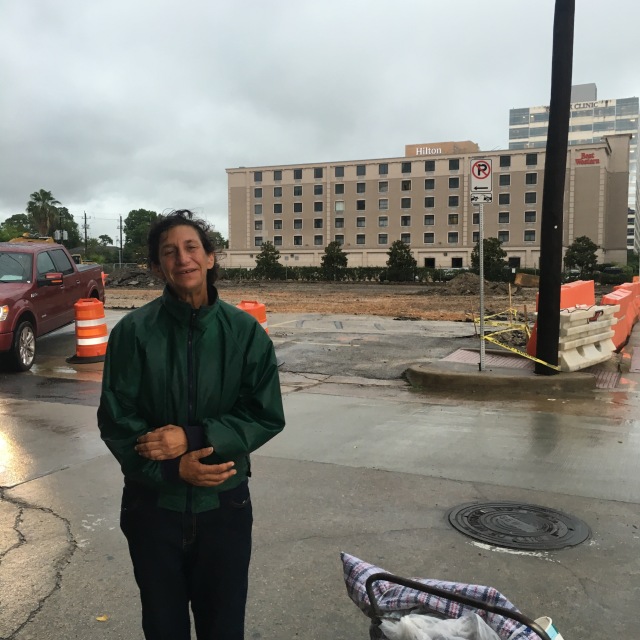 I walked a few paces and then wondered why on earth I hadn’t given her any money. I reached in to my fanny pack, grabbed some, and walked back to her. Dana literally jumped with joy! She thanked me and thanked God. I guess its never too late to turn around and make someone’s day.

I hit the sidewalk. It started to downpour. I made my way down Highway 90 just inside the inner beltway. It started to storm. Concerned with my safety, I booked a room at a rundown motel. It stormed all night and the building shook.
I got a phone call from Doug Barrow from Jacksonville, FL! We had met during the first few days of this journey at Our Lady Star of the Sea in Ponte Vedra Beach FL. Seems like such a long time ago! Doug checks in on me every now and then. He was the one who set up my visit with the Cenacolo community in St. Augustine, FL. We talked about Providence, mercy, and how crazy it is how I made it to Houston!Back in late February, I think we both might have doubted that I would make it this far. It was great to hear from Doug! 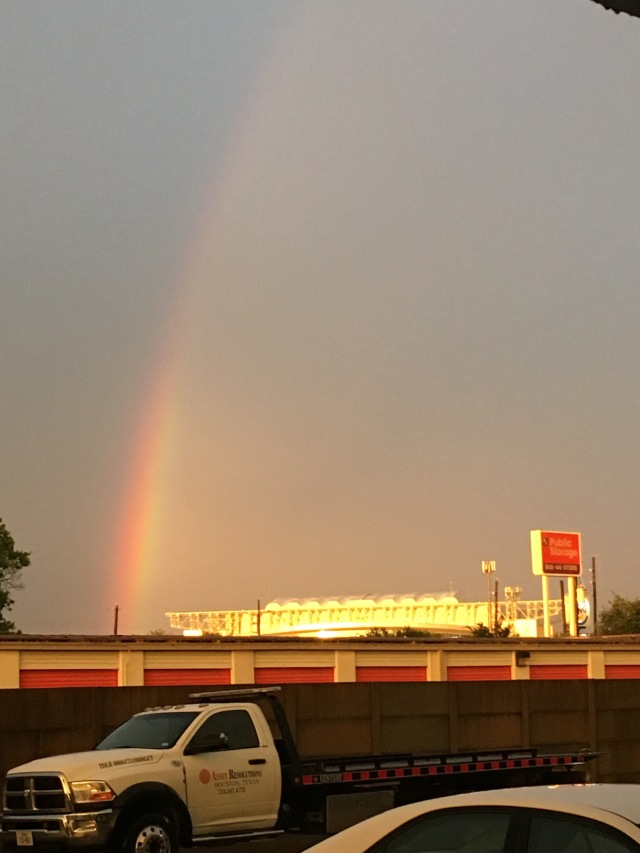 There was a strange break in the storm, where a rainbow shone across the sky! I have never seen anything like it, lightening, downpour, and a rainbow, all at the same time. Just then I got a call from my sister Emily! We chatted and caught up with each other’s lives. I fell asleep feeling thankful. What a great day. Houston!