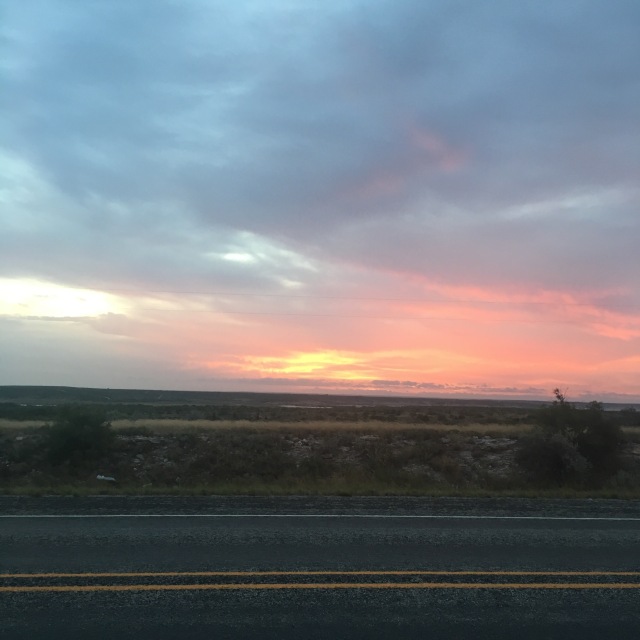 I rose before the sun and and broke camp. I repacked the buggy and made my way up to the road.

A flat tire. I wanted to pretend it didnt happen. I tried to keep moving. I leaned on the guard rail, watched the sun rise.

I ate pizza as I patched the tube. I hit the road.

It was a great morning. Clouds kept the heat of the sun away. I was making good ground.

The landscape is changing.

I passed along a border patrol checkpoint. I have seen many agents traveling along Highway 90, I usually wave. Adam saw me a few days back east of Brackettville. He came down to the road with a friend and we chatted for a bit. He asked me where I sleep, and I told him usually churches, but wherever I could to stay safe. My cell service had been spotty for the last day or so. I asked them what it was like moving forward: nonexistent. They were great guys. I hit the road. 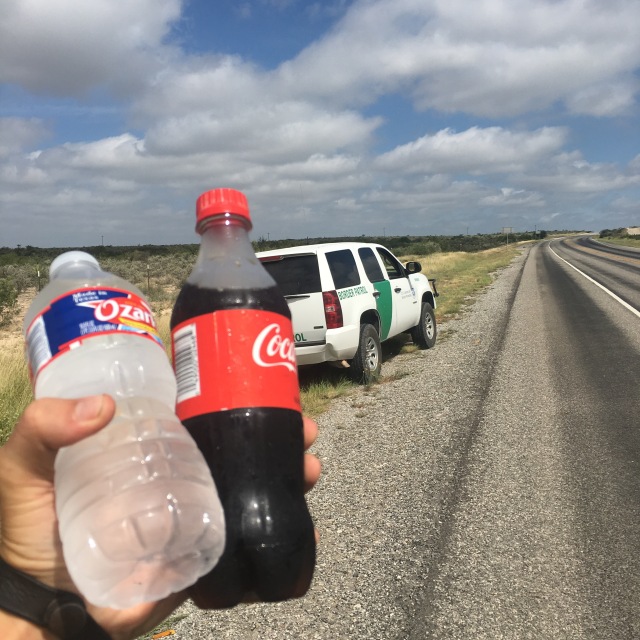 After a half mile or so, Adam stopped roadside to give me some drinks! A cold coke and a cold water. I was so thankful. I drank them as they were: cold. He told me the guys would be keeping an eye on me, and to let them know if I needed anything! He headed west.

It was the kick I needed to make it into town. I upped my pace.

I saw some weird creatures in the hills. They moved in a strange way, like nothing I have seen before on the road. I have seen goats and ponies, and everything else. I thought they might have been strange dogs, but couldn’t make them out. They littered the hills, but their faces were hidden. After a few miles I found some by a fence. They were sheep! 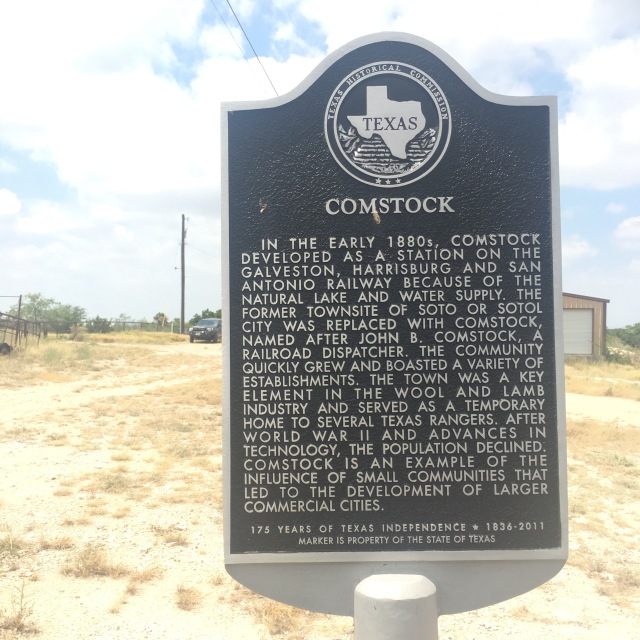 I swung by a convenience store to use the bathroom and ask for directions to the church in town. I had no service. Barbara was very kind, and gave me directions to Mary Queen of the Universe. 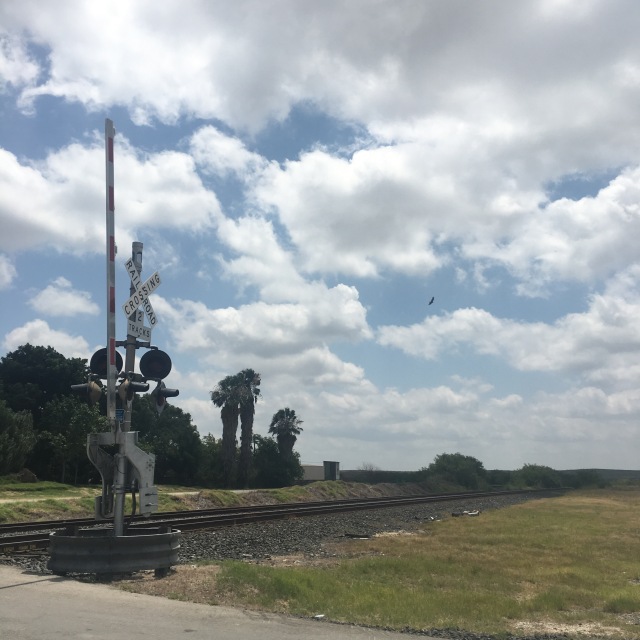 I made my way through town.

The vigil Mass was at 4 p.m. It was just after noon. No one was around, and the church was open. I went inside, said some prayers, and cooled off. I headed back outside to sleep in the shade beneath a tree.

A neighbor named Mark came by and gave me a cold water! It was very windy, and I was using my sleeping bag to block the wind. He wanted to check on me to make sure I was ok. 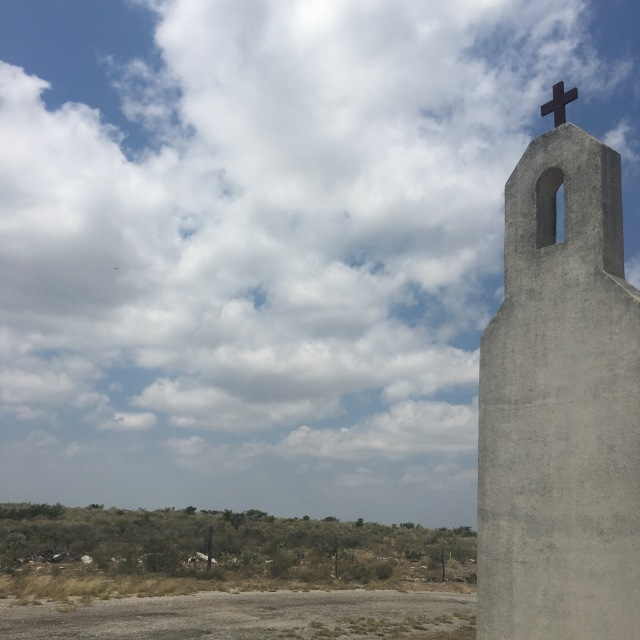 Adam came by! We chatted in the parking lot, overlooking the landscape. Mexico was just over the hill. Adam is originally from New York. He moved to the border 8 years ago. He told me originally he hated it here, but the land grew on him.

He gave me some almonds and some grapes! We speculated we might cross paths again. He took off on patrol.

I thought alot about the border. I had very little service. My phone actually thought I was in Mexico!

I washed up inside the bathroom at the church and put on a clean shirt. I waited inside for the congregation to show up. 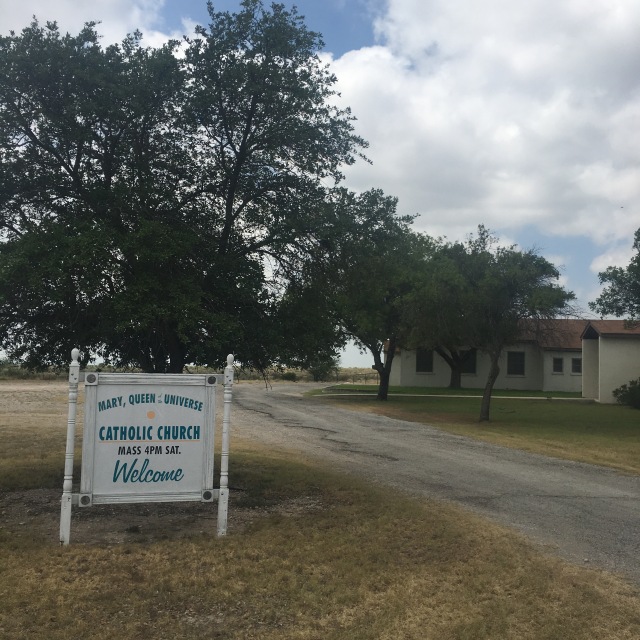 A man named George swung by. Mark is his son. George’s wife Ida recently passed 😦 . He gave me some chicken and a cold water! He told me he would see me later at Mass.

At the end of Mass, Fr. Pius asked me to introduce myself before the final blessing. I must have stuck out like a sore thumb. I think everyone was curious as to who I was. I told them a little bit about the pilgrimage, and everyone was really receptive. Fr. Puis asked what help I needed, I told them a safe place to sleep and perhaps a meal. We received the final blessing.

The people at Mary Queen of the Universe in Comstock Texas are so merciful! They flooded me with donations, well wishes, offered me dinner, and a place to stay! They also asked lots of questions! Margarett, Stephanie and her son Edgar, Bill and Jenny and their family, George, Missy, Anne, and many others!

Margarett and Bill brought me to the Comstock Motel and got me a room! They also took me out to dinner! We doubled back to the other side of the Amistad Reservoir. What had taken me two days to travel on foot, we traversed in what seemed like minutes. We ate at Wright’s, a really good steakhouse just past the Amistad. The food was so good!

Margarett is Bill’s aunt. They are ranchers, and their family has lived on their ranch in Comstock since 1897! We talked about all different kinds of things. Ranch life, the vegetation, weather, this journey, Mexico, and how life has changed along the border over the years. Their property actually borders Mexico!

We doubled back to the church to say our goodbyes. Its so strange, just spending some short time with people on the road and I feel like I know them very well. We parted ways.

Comstock is an interesting town. Months on the road and I havent seen one quite like it. I could have spent a whole day walking around and photographing things. 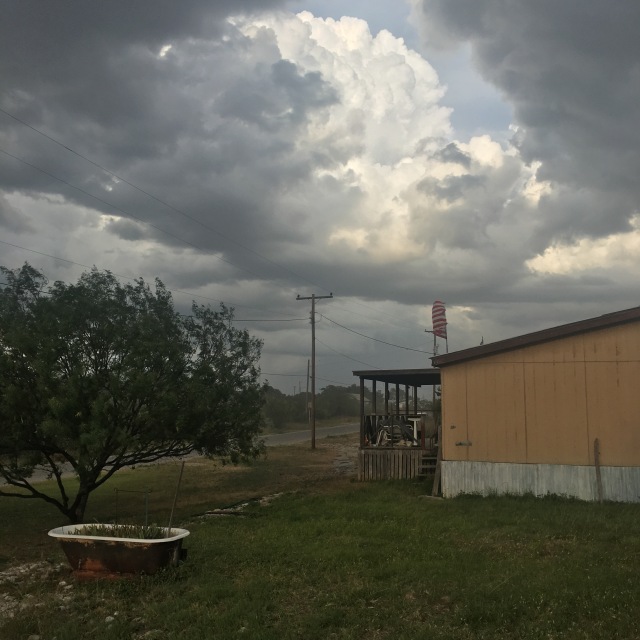 Storm clouds rolled in. I quikcly made my way to the motel with the buggy. 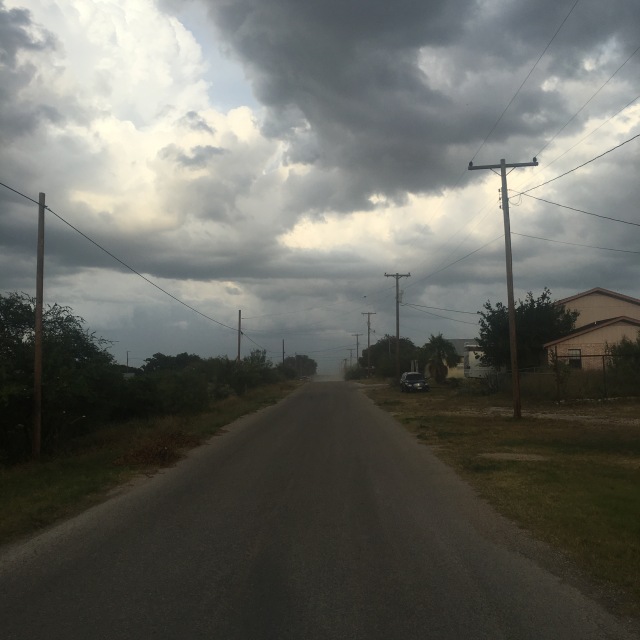 A dust cloud blew down the street!

I made it to the Comstock Motel. I retired to my room. There was wifi! I messaged family and friends to let them know where I was.

Storms ripped through the desert just west of town. It was severe. I watched the lightening and felt the thunder. I fell asleep feeling thankful for a safe place.