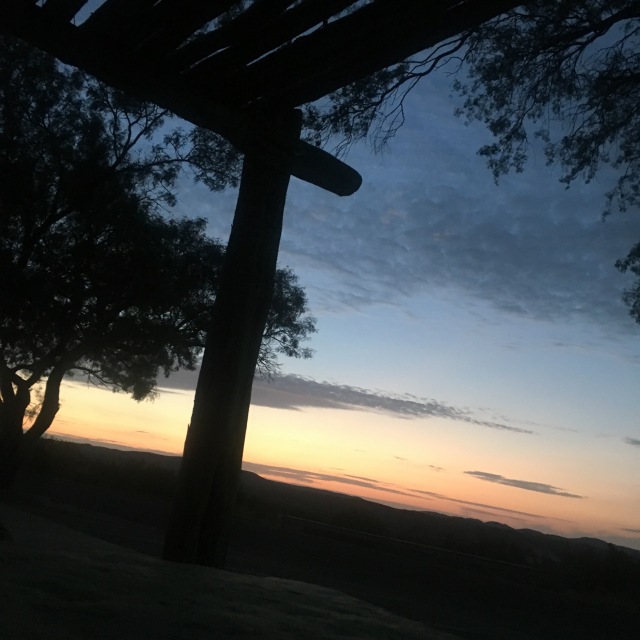 I rose before the sun and left the buggy. I headed down to the Rio Grande just on the outskirts of Langtry. 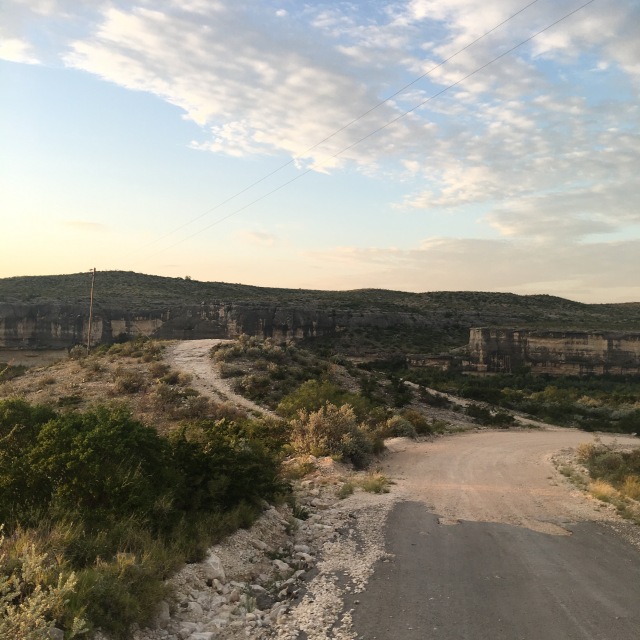 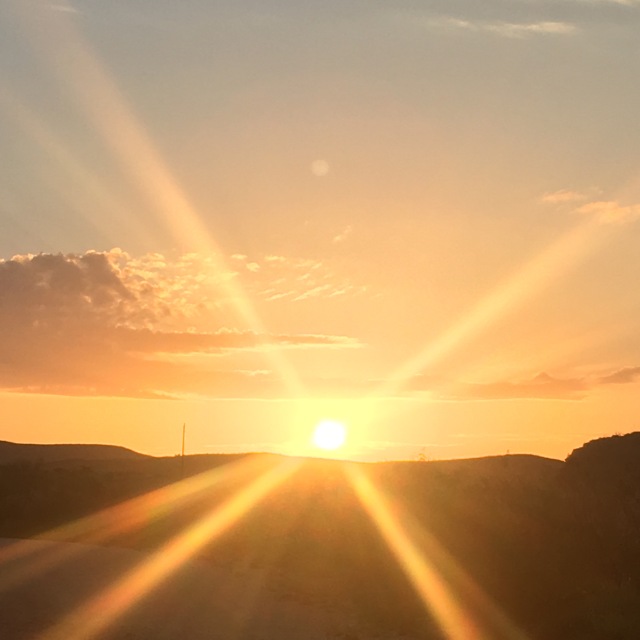 I watched the sunrise on the border of Mexico.

I headed back up to the visitors center and broke camp. I repacked the buggy and waited for the center to open at 8 AM. 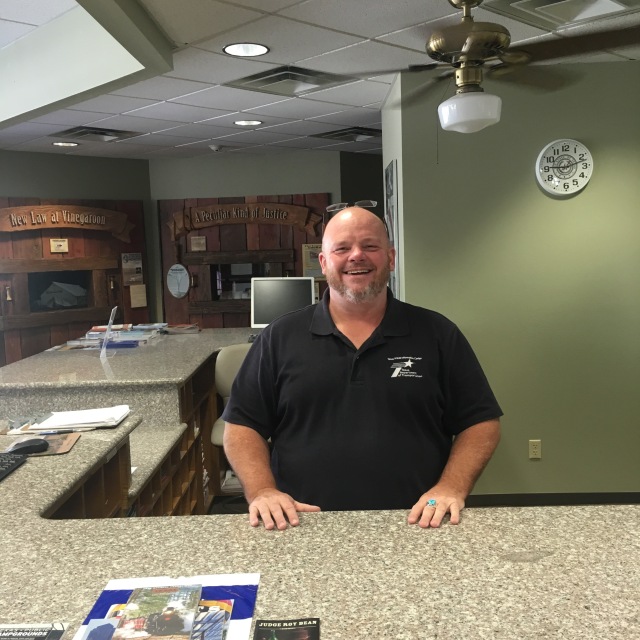 I met Lee! He staffs the visitors center. He was really nice and welcoming. He pointed out a cold water fountain where I could fill up my water bottles. 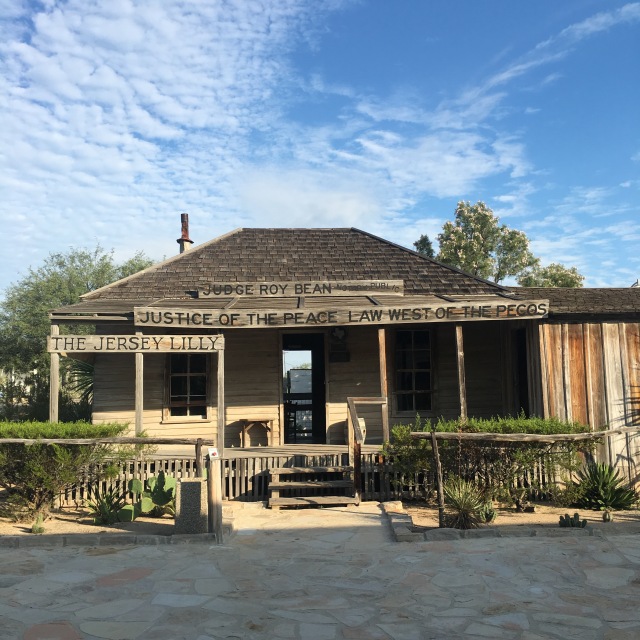 We talked a little about the journey, and my route headed west. Lee is a bird watcher, and travels all throughout the southwest. He pulled out a few maps and we speculated routes. We also talked about avoiding the heat of the day. Lee gave me a play by play for the road to El paso. Where rest areas were located, distances without potable water, and what I would find in each town. 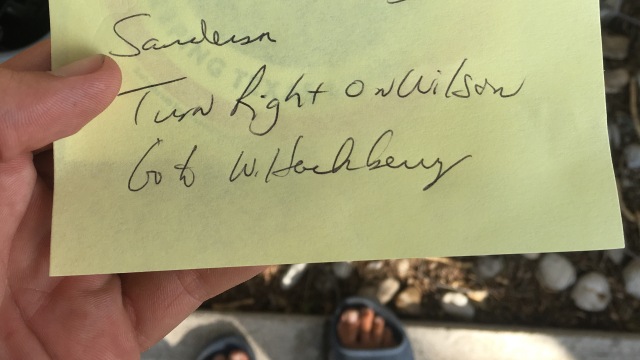 Lee offered me a place to stay in Sanderson! He told me he has a guest house, and that he would leave it unlocked for me. It was over 60 miles away, and would take me a few days to get there.

Grum rolled in! He filled up his water supply and connected to the wifi. We decided to meet up at the convenience store up the road for breakfast.
I said goodbye to Lee, he told me he would keep an eye on me out on the road. We parted ways.

Grum and I made it to the store for breakfast. He had some eggs and toast, and I had a burger! We talked with Patricia who staffed the store about our adventures. She asked us for our autographs haha! 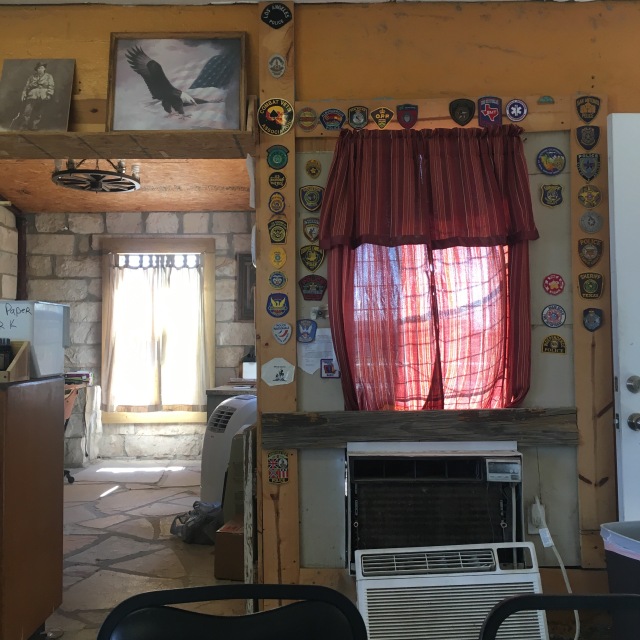 We hung out in the cool store and chatted. Grum has a Facebook page: “Grum goes global.” He plans on meeting up with his wife in Los Angeles in August so they can cycle up and down the west coast together. Grum hasn’t been home once in the last 2+ years!

I decided to have some food made to go. Grum headed off into the desert. We parted ways. 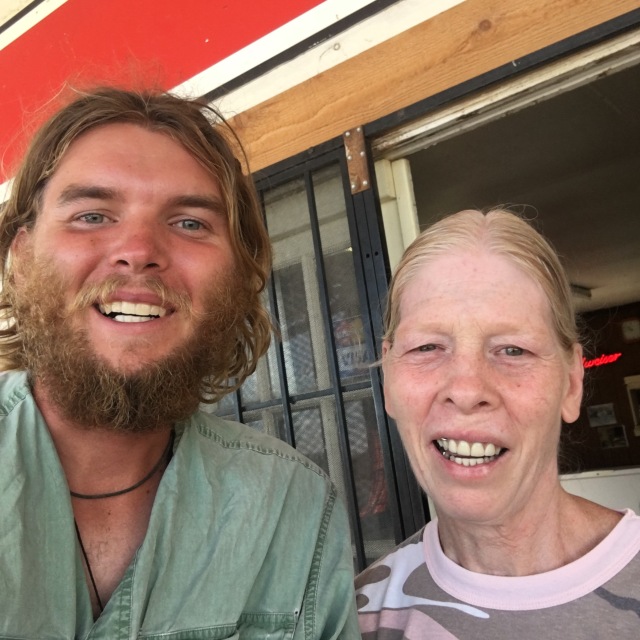 me (left) and Patricia (right)

Patricia sent me off with a little more food than I had asked for! I bought some canned goods and some snacks. She told me there was a general store in Dryden, and to make sure I got there before 5p.m. the next day so I could restock. I hit the road.

It was hot. Really hot. I usually dont sweat much when I am just walking, but my shirt quickly got drenched. 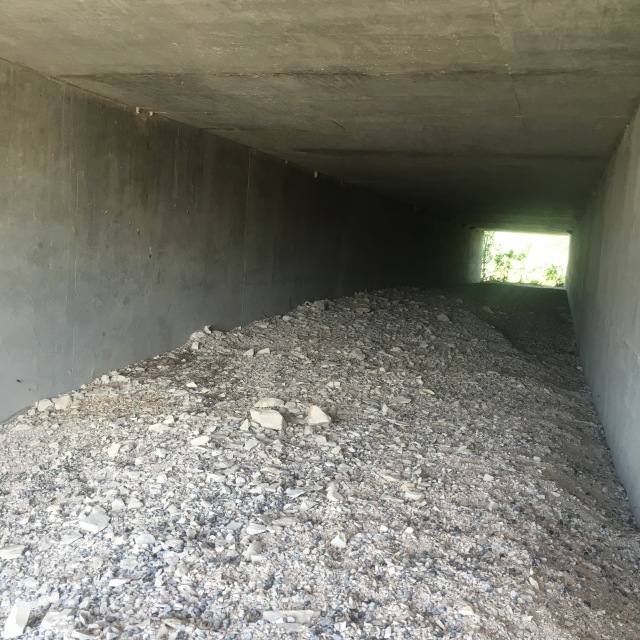 I stopped and took a break in a drainage culvert. I needed to cool my body temperature. It was a brief break.

I drank lots of water. Constantly. And gatorade too. I sometimes forced it. Traveling mid day was costing me both resources and energy.

Dimitri pulled over! He works for Fedex. He was headed my way and told me Patricia had asked him to bring me a cold water. I thanked him. What a great guy!

I drank it cold. 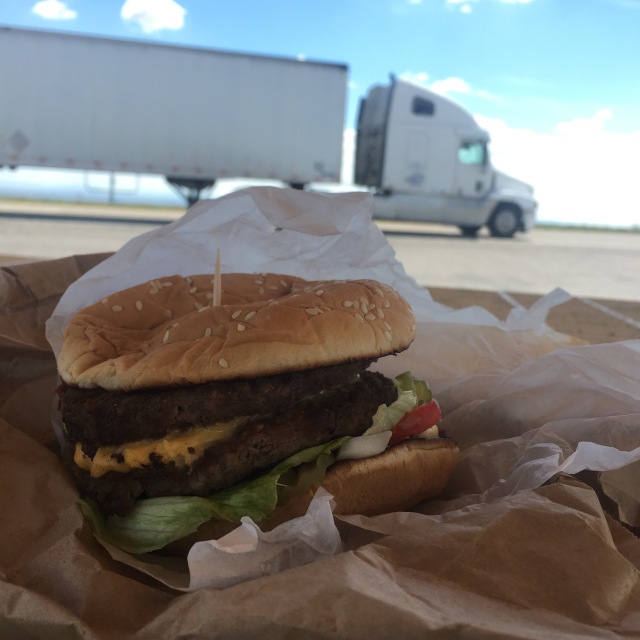 I chipped away at the miles and made it to a rest stop around 3p.m.. I ate a cheeseburger and took a nap. 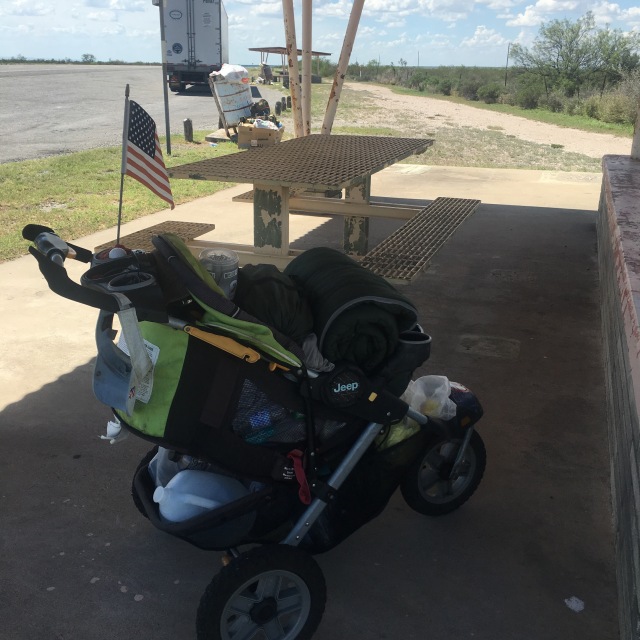 I hit the road shortly after 5p.m.

Lee pulled over on his way home from work! I had mentioned my head lamp broke, and he gave me a flashlight! He made sure I had enough food and water, and told me he would see me the next day. We parted ways. 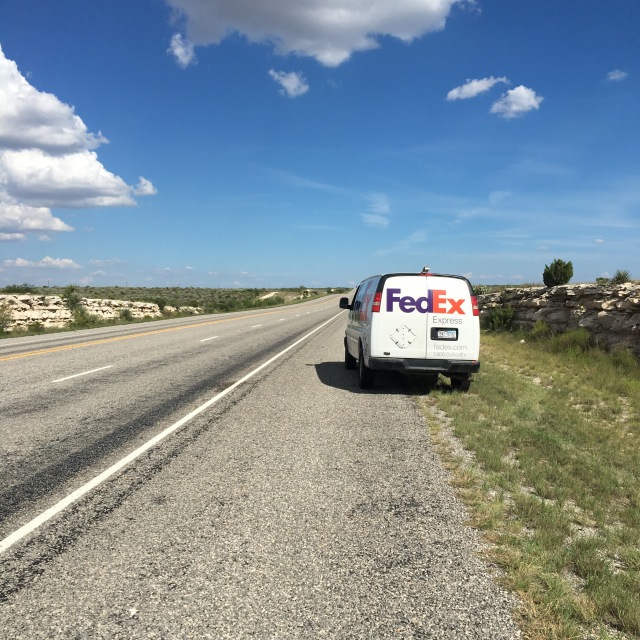 Almost immediately after Dimitri pulled over! He gave me a styrofoam cup with ice, and a cold mountain dew! He told me he would see me the next day, and then headed east. Wow!

It was the kick I needed. I started putting in the miles. Per usual I saw great sights. The desert is an amazing place: 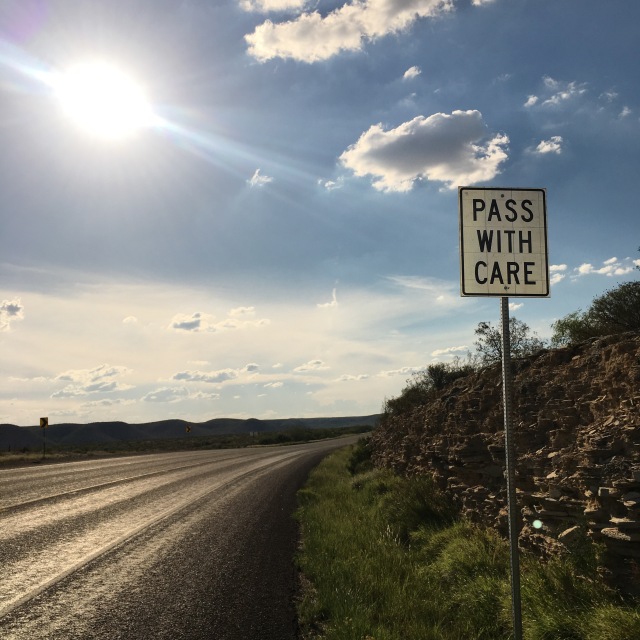 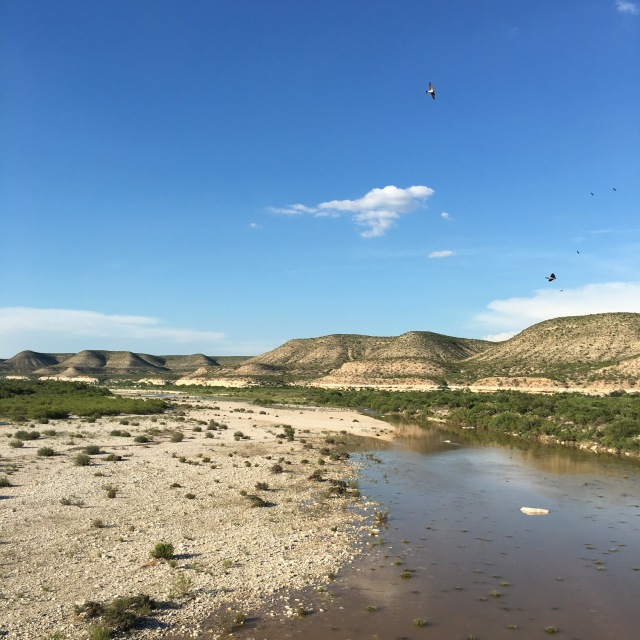 At sunset, I was able to rig up the headlamp with some tied off cloth. It held.

I traveled into the evening. High up on the hills, it was windy!

I scouted places to sleep. There weren’t any drainage culverts, and no where to hang a hammock. I found some mounds of asphalt and moved some construction cones. I made a little fort and slept on the ground. The wind calmed.

The stars were amazing. The Milky Way was directly above me. The longer I star gazed the more tired I became. I fell fast asleep.