I awoke with the sun behind St. Mary’s. I spent the prior day in rest, running light errands, and exploring Macclenny.

I got the blood flowing with some stretches and calisthenics. I ate 4 mangoes and 2 bananas for breakfast. I left St. Mary’s at 8 am and started walking. It was a cold night and I needed to warm up my legs. By 9am I was outside the bordering town, Glenn Saint Mary, and was now running hot.

By far the best maintained road I have run on so far. With a large shoulder, groomed roads, and smooth pavement, I traversed the morning miles with ease. I even met some goats!

Just before Sanderson Jim pulled over to say hello. It was really nice to see a friendly face! Wish I got a picture of him. Jim and his wife Bonnie had put me up in a motel on Saturday night. Jim gave me $10 and said they had been looking for me on Sunday. I explained I laid low on Sunday, and ended up pitching my hammock behind St. Mary’s. We exchanged information and speculated on whether I would make it to Lake City or not. We both thought I could do it, and I drew inspiration from his encouragements.

Shortly later, Officer Crawford stopped by to check on me. He thought I was pushing a baby down route 90, haha! I complied as he ran a check on my ID number. He seemed interested in my journey and wished me luck.

I met Sunny, a cyclist, on his way to Los Angeles. He is from New Orleans and hopes to stop at home for some rest along the way. He washes cars for money and usually pitches a tent at truck stops. We chatted for a few minutes about our routes and journey. Always fun talking with fellow adventurers.

I broke for lunch and ate 4 grapefruit and some collard greens. I stayed out of the sun during the heat of the day and had a great 60 mins of rest. 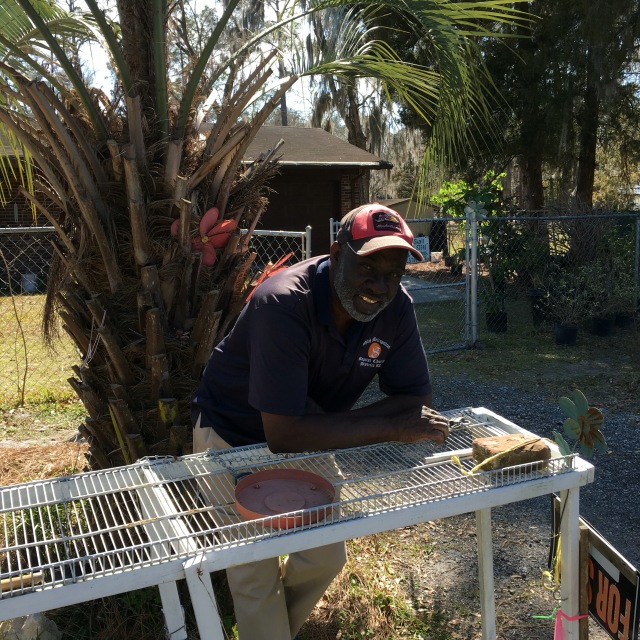 By mid afternoon I rolled into Sanderson, on pace for Lake City before sundown. I met Maxwell and Verdail. Maxwell owns a flower stand along the 90. Verdail is his friend from church. Maxwell was very inquisitive about the journey I have been on, and where it will lead. The conversation quickly turned to our beliefs, Maxwell is a baptist. We talked there on the side of the 90 for more than an hour. It was really nice talking with him even though I didn’t necessarily believe in all the things he did. We both made it a point to listen to one another.

After talking with Maxwell and Verdail for so long, it became clear to me I wouldn’t be staying in Lake City that evening. The sun now sat low on the horizon, and any attempt at reaching Lake City by sundown would be foolish (although perhaps do-able).

I swung by a Citgo in town and bought another winter hat and some ear plugs. Samanda was really nice and gave me a HUGE bag of fried chicken and biscuits. Not exactly my idea of nutrition but I gladly accepted it as a gift.

It was a long few miles to Hog’s Pen Landing campsite in the Osceola National Forrest. I enjoyed the road and took lots of pictures. 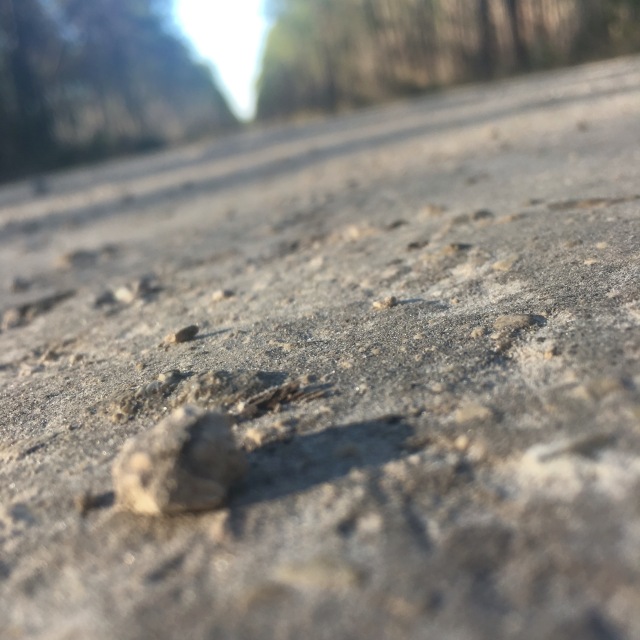 I arrived at Hogs Pen shortly before sundown and set up my hammock right on the lake. I stored all of my food in an empty trash container: I was in bear country. After contacting friends and family I laid back to close my eyes. It was very peaceful. Or so I thought…

About an hour after sundown, just after falling asleep, a white ford pickup truck pulled up and shined a light right in my campsite. A few men and a girl used some choicy words when they saw me set up there and begrudgingly moved to the next lot over.

They immediately turned up their music incredibly loud. They must have had a sound system with a sub woofer. The music boomed throughout Hog’s Pen Landing. I am surprised it didn’t wake the trees. Suddenly my oasis of peace vanished and I tried to stay calm.

I was pretty upset. They weren’t just late night partiers around a campsite drinking beers. I picked up on some of the things they were doing and none of them were good. Ontop of it all, they were extremely mad at me for whatever reason.

After weighing my options, I decided to move. Safety was my main concern, but I also needed rest. I broke camp at 8pm without using any light. All my food was in the lot where my friends now were.I figured I could go back for it in the morning if it was still there. I moseyed on up the road to find a quieter and secluded camp site. There wasn’t one.

Long story short I made the 3 mile hike up behind Ocean Pond to safer and quieter grounds. On the bright side the stars were unbelievable! I had trouble finding an unoccupied campsite, so I hung my hammock right on the beach on the other side of Ocean Pond. With my late night hike I probably covered close to 30 miles that day. By 10pm I was fast asleep.