Day 97
At 6 a.m. the sky started to lighten. I packed up the buggy and and headed into town.

I went to a recreation park that opened at sun rise. I hung my hammock between a few live oaks. I was hoping to catch a few hours of sleep. I did!
I awoke to a park employee telling me I had to go. I think he thought I had slept there overnight. I told him I was traveling and had come to the park at sunrise. I also told him I didn’t plan on staying much longer. He told me it was ok.

I washed up in the bathrooms and toon a sprinkler shower. I wanted to check out the lake and maybe go swimming, but I just didn’t have it in me. I made it to a gas station and ate some biscuits and sausage for breakfast. I bought a gallon of water, swapped out the bandaid on the tire, and hit the road.

I left Highway 90 ALT and followed Highway 102 north. It took me through so many beautiful areas!

I snacked on what was left of the almonds and dried cherries David’s family had given me. I drank a LOT of water. At noon I took a roadside break in the shade. 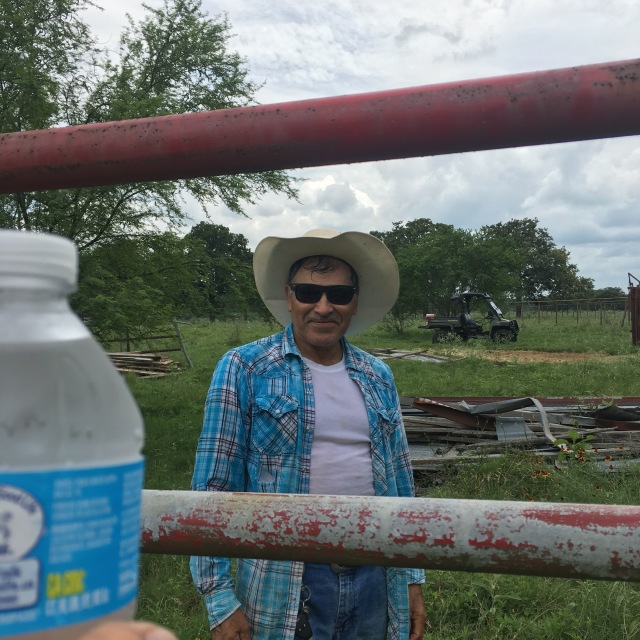 A few miles from Alleyton, Pedro made my day! He was out in the field and saw me walking. He offered me a cold water! I felt so thankful, and drank it while it was cold. It was the kick I needed to get into town.

I followed Alleyton Rd through town. At one point a crazed pitbull escaped a fence and we had an intense battle. I won. It must have got my adrenaline going because I felt pretty good after that, haha. I stopped at a truck stop for a break.

With clouds setting in, I headed for Colombus. 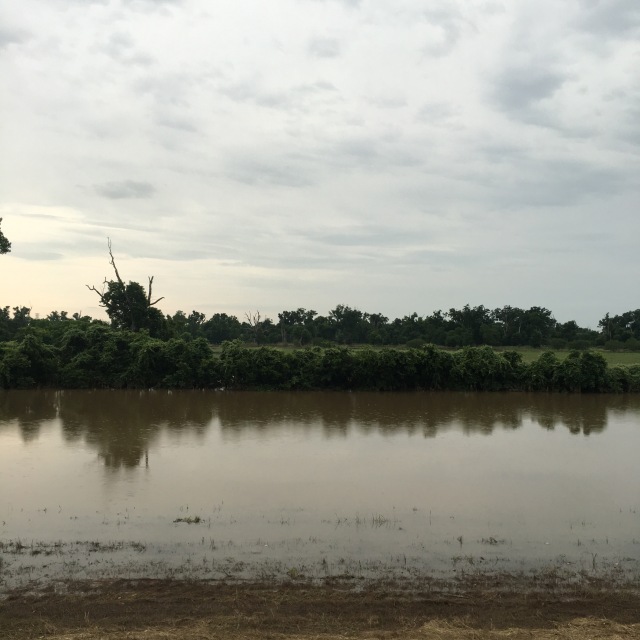 I saw lots of flooding along the Colorado river. Roads had been sectioned off. 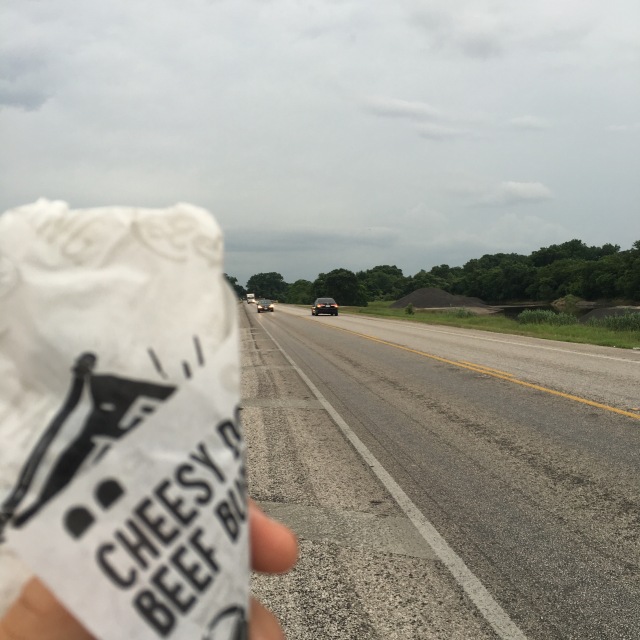 A man pulled over and said he saw me that morning back in Eagle Lake. He gave me a burrito from Taco Bell and told me God bless! I always draw encouragement from people helping me out. Amazing!

I walked along the Colorado and made it to St. Anthony’s church. I talked with a few different people, but I couldn’t seem to get in touch with priest. There was supposed to be a 5:30p.m. Mass at the church, but the whole building was locked.

I made it to the First Baptist Church a few blocks down. Geneva gave me permission to camp! I felt so thankful. I left the buggy at the church, grabbed an umbrella (given to me back in Houston) and headed for Walmart. I grabbed the supplies I needed to replace the tires. They were out of mosquito nets :(. I also grabbed a spare inner tube just in case. I doubled back to the First Baptist church and sought shelter through the storm.

I changed both rear tires! It felt so good getting it done. A couple times in the past few days I had worried about having to abandon the buggy altogether. Its getting rickety!
I watched the storm. Shortly after sunset, I crawled inside the sleeping bag. The rain kept most of the mosquitos away. It also cooled down the air. I slept really good!