Day 27
I woke up behind the First Baptist Church in Cottondale FL. I had slept well. The extra layers Anthony and Nolan gave me kept me warm all night. 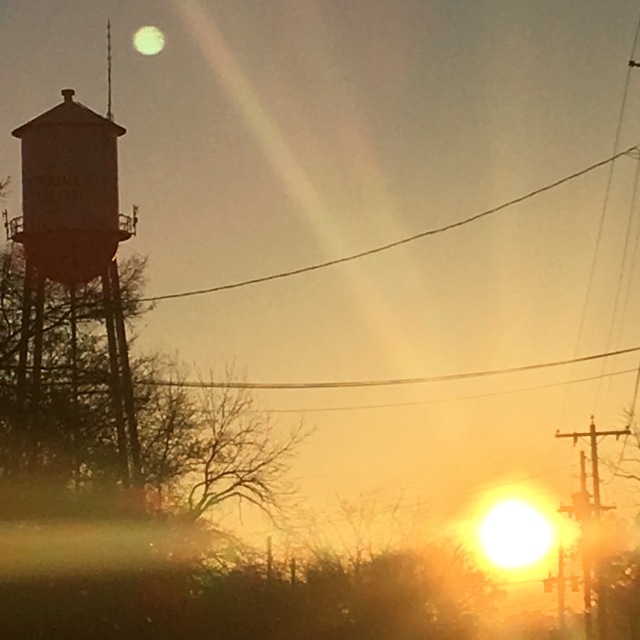 I broke camp and headed over to a gas station on the 90. I used the restroom to freshen up. I tried to use the air machine to fill up the tires on my buggy, but all it did was deflate them. I headed across the street to use the competitors machine, and it worked much better.
I charged my phone outside a family dollar I had made a purchase at the day before. I did a few stretches, and at 8 am was on the road.

Vocab Word of the Day 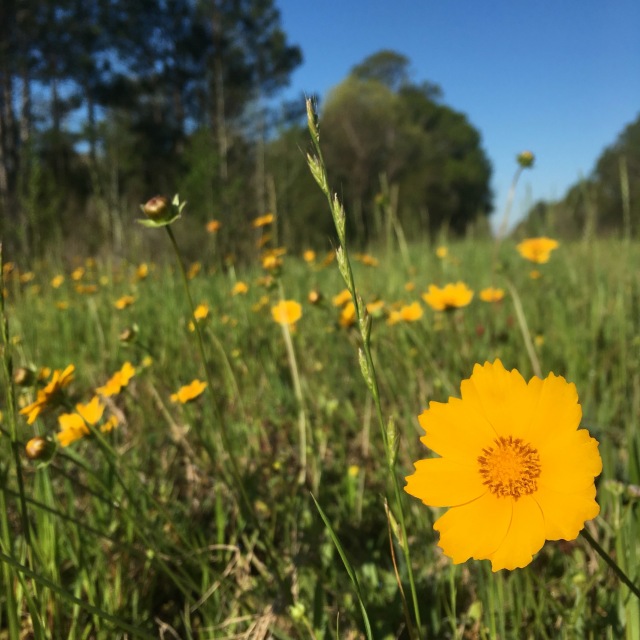 I decided to walk all this week up until Easter. I found a good pace and started to put in miles. I ran into a lot of vicious dogs throughout the morning. I am pretty scared of dogs and it’s not always fun encountering them. I kept singing “Hound Dog”, it seemed to confuse them haha.

Chris and Samantha (daughter hidden in between!)

Chris, Samantha, and their daughter saw me and pulled over right there on the 90. They gave me some money for the journey. Chris wished me luck and just like that they were gone. Pretty crazy!

I hit Chipley around 11 am. I went to the Library to use wifi but the service was down. The library ladies were really nice and gave me directions to the library in Bonifay.
I broke for lunch and enjoyed sitting beneath a tree in the shade at the library.

Back on the road, Rose pulled over and asked if I was homeless. I told her I was traveling, and she gave me some money. She wished me luck and was gone. Pretty amazing, people who pull over to help a complete stranger. It meant a lot!

I kept my pace up and kept chipping away at the miles. I met a fellow traveler who I had seen a few days ago a few towns back. His mileage must be low because I ran into him again. He must be enjoying the adventure!
We had a quick conversation there on the road. I really liked his set up, one of those crazy front pedal bikes! I didn’t catch his name but I snapped a quick photo of him as he leap frogged me. 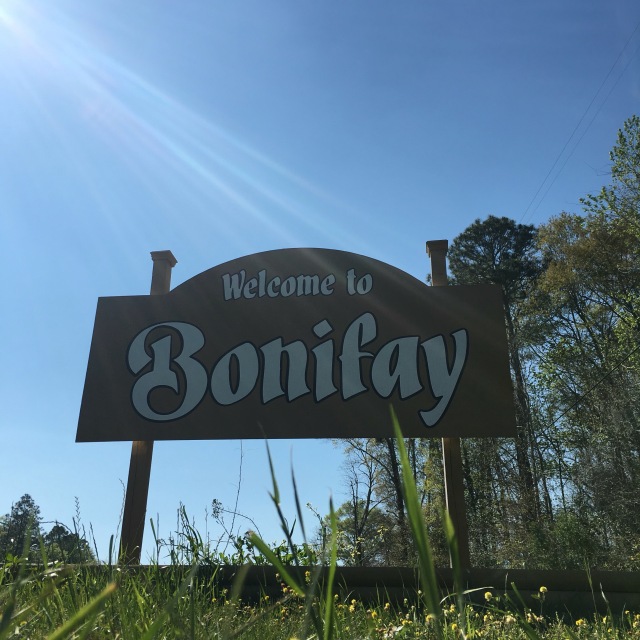 I reached Bonifay at 3pm, and headed to the Library to catch up on journaling. I caught up with family, and both new and old friends alike. I passed the First Baptist Church in town, and saw a band called Bread of Stone unloading their equipment. They looked pretty professional. I chatted with some of the guys. They were having a free concert the next night at 6pm. I told them I was just passing through but if plans were to change I would definitely check out the show.
I thought about asking for the pastor, to receive permission to camp on the property, but the place looked so busy with all the comings and goings of the band. I figured I’d check out town and find somewhere else.
I headed to Piggly Wiggly (actual name) a grocery store down here, and bought a loaf of bread and some vegetarian chili. Eating dinner I spoke with Nolan (different Nolan) who worked at the store stocking shelves. He asked about my travels and offered me Easter dinner at his church outside town if I was still about. I thanked him and told him I would take the offer into consideration.
I checked out other churches in town, but something just didn’t seem right about them. I usually don’t let my instincts dictate where or what I’m doing, but they do factor in. I headed back to the First Baptist Church and poked my head in the door.
I met Chris and Keesha, and immediately received permission to camp. Chris, the youth pastor, and I stepped outside and discussed possible locations to hang a hammock. He was in the middle of a meeting with all the Youth pastors, but dropped everything he was doing to help me. He made me a huge plate of food, grabbed me a bunch of cold sodas, and gave me a big bag of snacks. It was so overwhelming in a good way.
I chatted with Keesha, who saw me walking earlier. Her and her daughter were bicycling around town earlier that afternoon.

Just then Chris came back with Nick from the meeting and asked if he could “one up” my stay. He told me it was supposed to get cold and offered to pay for a room at the Bonifay Inn. I couldn’t believe it! I graciously accepted but words couldn’t seem to extend my thanks. After getting all my gear in the van, we headed off 2 miles outside town.
Nick is the “rec guy” at the church and also Chris’ intern. He studies at the Baptist College of Florida in Graceville, the same place Nolan from Cottondale studies. He hopes to be a youth minister someday, and we talked about all the crazy trips the church goes on.
Nick is also a fellow hammock camper. I thought I was a minority with my hammock, but a lot of people seem to hammock camp down here. Nick spent his last summer working at a camp. He slept in a hammock the whole season right on the dock of an ocean bay. He said sometimes dolphins would swim around the bay. So cool! Nick and his friends stacked 6 hammocks on top of each other one time. The top person was 40 feet in the air!
Chris and I talked about mercy, and what it means to be merciful. He was really interested in the pilgrimage. His words and actions were encouraging. Certainly Chris, Nick, and the First Baptist Church were being very merciful to me!
Turns out, First Baptist Church regularly puts up travelers at the Bonifay Inn outside town. Nick informed me usually 2-3 times a month someone traveling asks the church to camp on the property, and they decide to “one up” the traveler. Pretty amazing!
Chris led a quick prayer, and just like that I was left at my room at the inn. I processed everything that had happened and couldn’t quite believe it. Sometimes good things are overwhelming!

I spoke with Josh and Shanna next door. The church put their family up for a few days at the inn to help them get back on their feet. Josh offered me some burgers he was grilling out the bed of his truck. I had so much hot food from Chris I couldn’t accept, but thanked him the same. 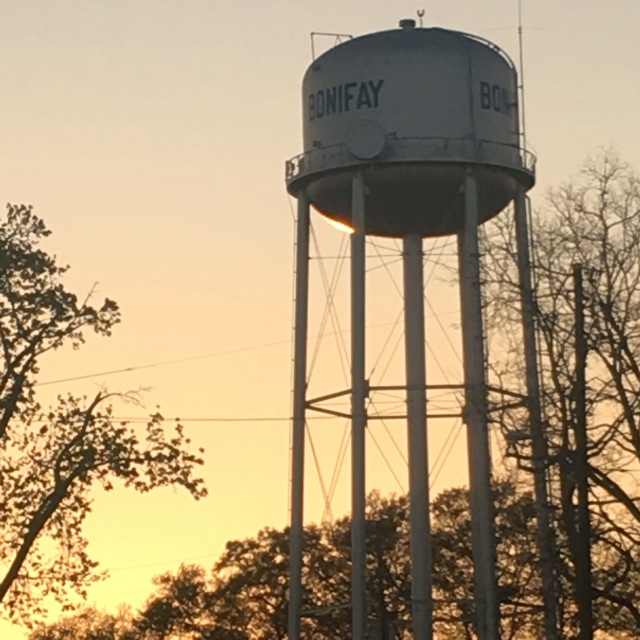 I caught up on the news and learned of some very sad things. I fell asleep soon after.